The teaser of the upcoming movie, Ka Pae Ranasingam, is out. Directed by Virumand, the film was supposed to hit the screens in January this year but has since been delayed.

Starring Vijay Sethupathi and Aishwarya Rajesh in lead roles, Ka Pae Ranasingam highlights the plight of helpless village dwellers against those in power. The movie especially focuses on land-grabbing and the power dynamics between the underprivileged, the government and the powerful rich people.

In a voiceover, you can hear Vijay Sethupathi’s voice saying, “After caste and religion, politics of the world revolves around air and water.” Aishwarya Rajesh, who plays the role of Sethupathi’s wife, also makes a strong impression in the teaser as she goes from pillar to post to fight for her rights.

Apart from Ka Pae Ranasingam, Vijay Sethupathi is awaiting the release of the highly anticipated film Master, starring Vijay. The movie was set to hit the screens this April but had to be put on hold due to the ongoing coronavirus pandemic.

Rana Daggubati on His Wedding With Miheeka Bajaj: ‘I Found Strangest Time to Get Married’

A Mani Ratnam Movie is not just a credit that rolls before and after a movie. It is a hallmark of top-quality cinema, which is by default a visual spectacle. No, high-end special effects, just the play between shadow and light. Most of the time, dialogues in his movies are monosyllabic. No overly dramatic and lengthy dialogues. It is because as a filmmaker, he prefers images over words. His movies are simple but deep.

Born as Gopala Ratnam Subramaniam, Mani Ratnam started making movies to get away from the mundane 9-5 job. The ex-management consultant has since improved the taste of the audience with an entree of good cinema that has become a reference point to judge modern-day bad films.

He is also a daring, bold and wise voice of Indian cinema. Given that his creative freedom was limited by a producer’s understanding of what the market wants, he launched his own production banner, Madras Talkies, just so he can make movies the way he wanted.

As Mani Ratnam turns a year older today, here is a look at the ace filmmaker’s movies which are readily available to watch on Amazon Prime Video.

A girl refusing to fall in line quietly with an inconsiderate practice of society, is what put Ratnam on the map. The movie provides a female gaze of the arranged marriage system by showing the struggles of the protagonist, who finds it extremely difficult to settle down in a marriage with a stranger.

This is the movie that informed the world about the arrival of a world-class filmmaker. A Mumbai-based gangster drama tells the classic tale of haves exploiting have-nots and finally forcing the have-nots to rebel against the haves. Nayakan has several scenes inspired by Hollywood classics – Once Upon A Time in America and The Godfather. But, the fact remains this is one of the most inspired works in the history of Indian cinema.

After directing Kamal Haasan, it is only fair that he also makes a movie with Rajinikanth to restore the balance to our world. The movie is a reimagination of Mahabharata and Rajinikanth plays the modern-day Karna, who stands by his friend against his own family. 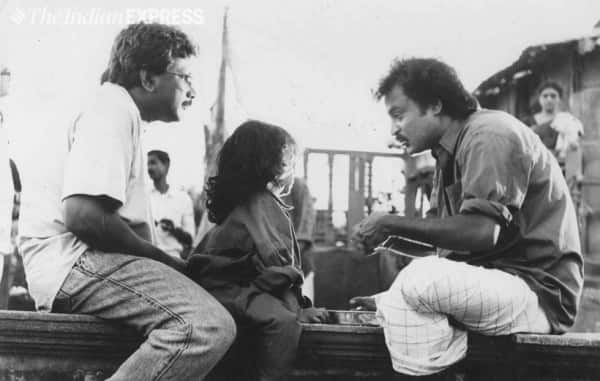 Mani Ratnam and Rajinikanth in Thalapathi.

It is one of the boldest movies of the 90s that tried to capture the politics, culture and human cost of terrorism. The protagonist is held captive by a terrorist group, which is demanding the release of its leader. The government is in a dilemma unable to make up its mind whether it is worth trading a high-value terrorist for the life of a guy who basically provides tech support for the intelligence. Now, it is left to the female lead to persuade the government to compromise for the release of her husband.

It was another daring movie by Ratnam, which showed horrors of communal riots. No matter how many times you have seen it, the climax scene supported by AR Rahman’s soulful music will move you.

If you are feeling overwhelmed by the heavy themes, you can catch a breather by watching this movie. It is easily the most light-hearted heist movie. 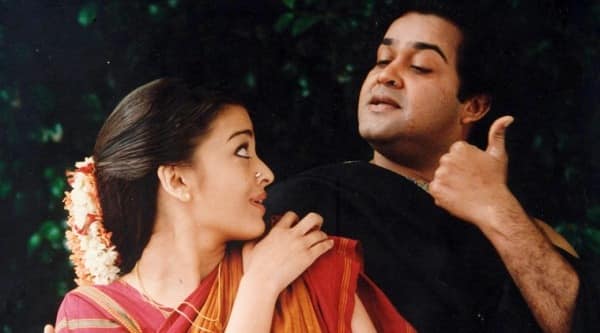 Iruvar, a movie loosely based on the lives of two titans of cinema and politics of Tamil Nadu, is a visual wonder. It is the work of a director, who was at the top of his form as a visual storyteller. And it has some magnificent performances by Mohanlal and Prakash Raj.

At the heart of this modern romance lies a story of class struggle. The story of this movie begins at the point where most romantic movies end. Okay, you rebelled against your family and society to marry the person your heart desires. Now what? Is your love strong enough to endure the challenges in a post-modern society?

What is the best way to demonstrate the futility of hate politics and violence but to show it from the vantage point of innocence: through the eyes of a child.

South Actress, Meera Mitun Is Keeping Her Social Media A-Game During The Quarantine. Check Out Her Recent Pictures

Who doesn’t know the South actress, Meera Mitun? She definitely doesn’t need any introduction. The Tollywood actress is known for entertaining her fans with her on-screen presence and she is also known best for her A-game social media posts. During the COVID-19 lockdown, she has been keeping her fans updated with some of the pictures. She is one of the avid social media users and never fails to keep her fans updated with whatever she does. Here, we have made a compilation of her Insta pictures, take a look.

From flaunting her traditional looks to carrying some glamorous ensembles, she never fails to grab attention with her fashion statements. She keeps her social media handles updated with her stylish pictures. The actress recently posted some of the pictures from her photoshoots. Here, take a look at her recent post.

The talented actress is known for bagging quite a few beauty pageants. She marked her acting debut with the film, ‘8 Thottakkal’ in the year 2017. Later, she was seen in films such as ‘Thaanaa Serndha Koottam’ and ‘Bodhai Yeri Budhi Maari’ and few among others.

Bollywood Actress, Kangana Ranaut Marks Her Debut As An Interior Designer. Check Out The Pictures

Apart from entertaining their fans, Bollywood celebrities are known for shelling out some major lifestyle goals for millions of their fans. The ‘Queen’ of Bollywood, Kangana Ranaut marks her debut as an interior designer after designing her sister, Rangoli Chandel’s house in Kullu, Himachal Pradesh.

In a recent conversation with Mumbai Mirror, the actress was caught spilling the beans on her experience of designing a house. The actress was quizzed whether she wanted to be an interior designer at some point in life, to which she replied, “Not really, I never really thought about it. I feel this comes naturally to me as creativity is somehow an extension of myself as I’m more inclined towards sophistication. I don’t know how to explain it but I think I volunteered to design it because it was my sister’s house and I know her from our childhood that she can’t be bothered. There’s just one thing about her which I don’t get and it’s the fact that she’s so hardworking that she eventually gets all things done and that too perfectly. She doesn’t like any frills attached to anything which of course is not my style so when she asked me for inputs I was like, ‘inputs and who will do the rest of the things’ and she’s like, ‘well, what is there to be done?’ And I’m like, there you go. So that’s how it all started.”

Here, you can take a look at the glimpse from Rangoli’s new house, designed by Kangana Ranaut:

When she asked me what kind of interiors do I like, I said I don’t like torn ,worn out, vintage ,old looking stuff, I don’t know what I like but I want new things to look new, I remember her face, that’s her style vintage, rustic ,worn out and totally purana looking things …. it was out of her comfort zone, she has been incessantly working on this and today when I saw her put finishing touches I was stunned, I can say one thing, this is not a house to me it’s heaven it’s a blessing … P.S walls are waiting for paintings, heaters needs to be fixed, we don’t have much help she is setting up everything with her own hands but I just couldn’t wait , will post more when it’s all ready 🥰..

After looking at these pictures, one would surely say that the actress is multitalented and she does everything to perfection.

On the work fronts, Kangana Ranaut was last seen sharing the screen space with Richa Chadha and Jassie Gill sports drama-‘Panga’. The actress is currently gearing up for the release of ‘Thalaivi’. The film is being helmed by A. L Vijay.

Abhishek Bachchan’s The Big Bull to Resume Shooting Next Month, Producer Says ‘Considering Location Where Crew Can be Stationed’

‘Body Cam’: Release date, plot, cast, trailer and all you need to know about the Investigation Discovery show’s Season 2

Sridevi And Boney Kapoor Are Couple Goals In THESE Throwback Photos

Deepika Padukone to Not Take Over Ranveer Singh’s 83’s Post-Production Work, Deet Inside

Mohena Kumari Singh on testing positive for coronavirus: The initial days have been difficult for all of us

‘Fuller House’ Season 5B: A splendid triple wedding later, will the Fuller-Tanner-Gibbler families stay together?

83 actor Ammy Virk: Ranveer Singh looked after us like his own brothers

Deepika Padukone to not oversee 83 post-production

Shah Rukh Khan Helps Toddler Who Tried to Wake up Dead Mother at Railway Platform, Says ‘I Know How it Feels’