Who is Sushma swaraj – 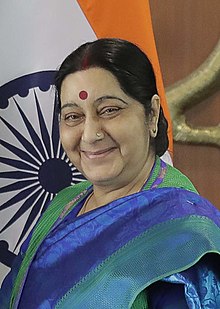 Sushma swaraj the eminent political leader and the foreign minister of external affairs of India was born on 14 Feb 1952 in Ambala Cantt.

she was born in a middle-class family of Hardev Sharma who was a member of RSS. Sushma swaraj completed her graduation from sd college located in Ambala Cantt and pursued her law course from PU which is in Chandigarh.

Sushma Swaraj in the politics at the very young age of 25 when she was elected as a member of legislative assembly from 1977 to 1982 and then from1987 to 1990.
In April 1990 she was elected as a member of Rajya sabha and from 2014 to 2019 she had served as minister of external affair under the government of PM Modi she was responsible for unpleasant the foreign policies.
On 6 aug2019 she died because of cardia finest in new Delhi the whole country as in shock at the demise of their legendary leader. Sushma Swaraj was a bold leader with rare qualities and her contribution to the nation will never be forgotten.