Modern Family came to an end after 11 seasons in 2020, and for many, it was the end of the era of family sitcoms. For 11 years, the characters of this family entertained their audience, and even though they overstayed their welcome, the way they made their audience laugh and cry will be remembered for years to come.

What is Modern Family all about?

Modern Family started as a mockumentary, a format which was earlier popularised by The Office, and had characters giving interviews about their day-to-day life intercut with their regular lives. But unlike The Office, the characters here hardly broke the fourth wall during the scenes. 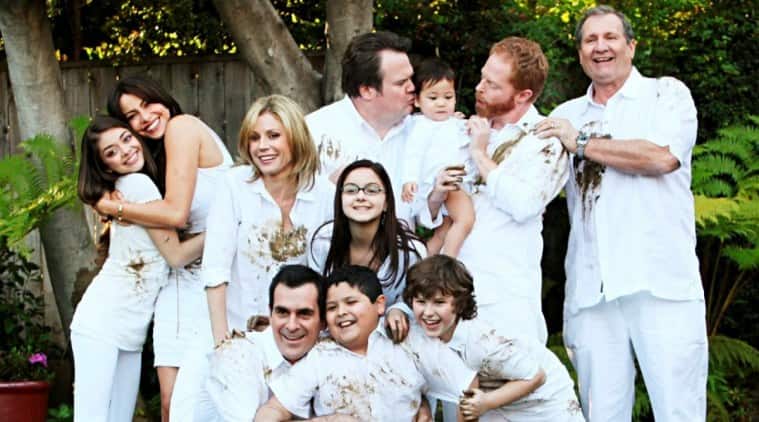 What works for Modern Family?

Modern Family was an instant favourite mainly because we had never seen a TV family that was so unique. The characters were unique, and the jokes were hilarious. Each character was written in a way that even their mannerisms made us laugh.

Mitch and Cam’s interpersonal dynamics was adorable yet funny. Add Lily to the mix and we got some of the sassiest lines of the show. With Jay and Gloria, we got two contrasting personalities that could have been classic in another show, but they appeared funny because of their differences – age, culture and upbringing. At the Dunphy household, Claire is shown as the voice of reason but the presence of Phil around her balances everything.

The show gave some of its best episodes in its first few seasons thanks to the perfect ensemble. Episodes like Mitch and Cam’s wedding, death of Phil’s mother, Alex’s graduation brought tears to our eyes, but the writers made sure that they gave us funny moments through them all. Modern Family started as a show which found humour in everyday things.

When did it stop working?

Modern Family was on a winning streak at the award shows and was churning out great ratings for ABC so it was only natural that the show would continue to get renewed. Unfortunately, this approach doesn’t usually work for comedies, and that’s what happened here as well.

As the show progressed, the characters got repetitive, and the writing got lethargic. We saw the first glimpse of this when Claire was given the storyline of local elections. The track pulled the episodes down and to make matters worse, Julie Bowen’s portrayal of the character got overbearing as the seasons passed. From being the voice of reason, she turned into an unlikable know-it-all whose storyline had almost no humour.

For Sophia Vergara’s Gloria, it was her mispronunciation of words that got people laughing, but the audience can’t be expected to laugh at that when the character has been speaking in English for many consecutive years. The Pritchett-Dunphy kids were dealt a bad hand, much like what we see of kids who grow up on TV shows. The characters are usually well defined when the show begins, but the writers don’t know how to make a personality evolve as it reaches its 20s. And the same happened to Haley, Alex, Luke and Manny. The four of them stayed almost the same – blonde (Haley), nerd (Alex), another version of blonde (Luke) and artsy (Manny).

The show is often cited as a pop culture phenomenon when it comes to representation of LGBT characters. This was one of the early shows to embrace marriage equality as a part of its narrative. Even though the show was set in an elite part of California, it was strongly relatable because of its familial connections.

Schitt’s Creek bows out with a bang

He penned the lyrics of melancholic songs like like “Kahin Door Jab Din Dhal Jaye”, “Zindagi Kaisi Hai Paheli”, “Rajnigandha Phool Tumhare” and “Maine Kaha Phoolon Se” among many others which are remembered to this date.

While paying him a tribute on Twitter, Javed Akhtar mentioned how the late lyricist Yogesh never got his due. He tweeted, “deeply sad to know that an exceptional lyricist Yogesh ji has passed away He wrote a number of great songs like kahin door jab din dhal jaye or zindagi kaisi hai paheli or kaee baar yun bhi dekha hai yeh jo man ki seema Rekha hai . Strangely the world did not give him his due.”

Here are 10 of the best Hindi film songs written by Yogesh Gaur:


Irrfan Khan had passed away on April 29 this year. (Photo: Sutapa Sikdar/Facebook)

Irrfan Khan’s wife Sutapa Sikdar shared a note remembering the actor after a month of his death. Sharing photos of the Angrezi Medium actor, Sutapa wrote, “‘Out beyond ideas of wrongdoing and rightdoing there is a field. I’ll meet you there. When the soul lies down in that grass the world is too full to talk about.’ It’s just a matter of time…milenge baaten karenge…. Till we meet again.”

Irrfan passed away on April 29 after a long battle with cancer.

Earlier, Sutapa Sikdar had written a beautiful note talking about her journey with Irrfan.

“It’s difficult to explain what a wondrous, beautiful, overwhelming, painful and exciting this journey has been. I find this 2 and 1/2 years to have been an interlude, which had it’s own beginning, middle and culmination with Irrfan helming the role of the orchestra conductor, separate from the 35 years of our companionship, ours was not a marriage, it was a union,” the note read.

A month after actor Irrfan Khan passed away from cancer in Mumbai, his wife Sutapa Sikdar remembered him with a beautiful Facebook post. The popular actor left the world for his heavenly abode on April 29 and telling all that their bond is beyond death, Sutapa took to Facebook and posted a never-seen-before picture of Irrfan along with a note that brings tears to one’s eyes. In the note, she wrote about meeting her late husband at a place which is away from the worldly things. Also Read – Irrfan Khan Donated For COVID-19 Patients But Didn’t Want Anyone to Know, Late Actor’s Friend From Jaipur Reveals All

Sutapa has been holding a brave face by asking the fans to stay strong when her own world has crashed down. She asked the fans to remember Irrfan in their hearts by helping others and doing the right thing in life. Sutapa and their son Babil-Ayaan also planted a ‘raat ki rani’, Irrfan’s favourite plant, where the actor was laid to rest. Also Read – Vishal Bharadwaj Honours His Friend Irrfan Khan With a Screenplay That Breaks Heart Into Pieces

Recently, one of Irrfan’s close friends in the industry – Vishal Bharadwaj,  who has also directed the actor in Maqbool, 7KhoonMaaf and Haider among other films, dedicated a screenplay to his dear friend. Explaining how he stood alone at the edge of Irrfan’s grave while looking at his heavy eyelids for the one last time in this world, Vishal recalled all the happy-sad moments he got to spend with Irrfan in his lifetime.

Irrfan passed away after a two-year-long battle with the neuroendocrine tumour. He breathed his last at Mumbai’s Kokilaben Hospital. May his soul rest in peace!

Never Have I Ever brings rare voice, and a newcomer, to TV

Ryan Gosling to Star in ‘Wolfman’ Monster Movie for Universal